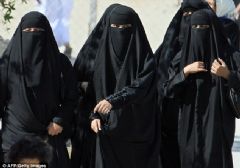 Saudi Arabian restaurants ban single women from entering because of their “mentally unstable” behavior such as flirting, smoking and using mobile phones

Restaurants in Saudi Arabia have banned single women from entering because of their 'mentally unstable' behaviour such as using flirting, smoking and using mobile phones.

Several restaurants have put up signs that say 'women are not allowed' in another blow for women's rights in the conservative Muslim kingdom.

There is no law banning women from travelling alone in Saudi Arabia but deeply-held religious beliefs dictate that they should be accompanied by a male family member when out in public.

According to The Week, one restaurant owner said: 'We put up these signs because we have seen numerous incidents of flirting taking place inside the restaurant.

'We'll only remove these signs when we make sure such incidents never happen again on our premises because such type of behaviour negatively impacts our business.'

Bloggers in the Middle Eastern state also described women who smoke and use mobile phones as 'mentally unstable'.