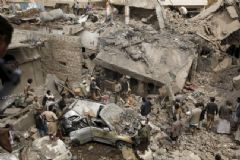 Site of a Saudi coalition airstrike in Yemen (File photo)

An airstrike by the Saudi-led coalition on Tuesday mistakenly killed eight civilians building a home in an area on the border between Yemen's southern provinces of Lahj and Taiz, security officials said.

They said the airstrike, which also wounded nine civilians, was called in by pro-government fighters who were locked in a fierce battle with Shiite rebels for control over a mountain overlooking a key military base that is home to forces from Yemen alongside allied troops from Sudan and the United Arab Emirates.

They said Jalis mountain was eventually captured by the Iranian-backed rebels, known as Houthis, after a three-day battle in which some 45 people were killed from both sides.

The capture of the mountain places the Al-Anad air base, which once housed U.S. troops and special forces, within range of the rebels' artillery. The officials spoke on condition of anonymity because they were not authorized to speak to the media.

Meanwhile, Saudi state television reported on Tuesday that a ballistic missile was fired in Yemen toward Marib, a city near the capital, Sanaa. The state TV report said the Saudi-led coalition in Yemen "confronted" the missile and it was destroyed. It did not elaborate.

The Houthis and allied troops loyal to former President Ali Abdullah Saleh are known to have a stockpile of Soviet-era Scud missiles. Several have been fired in the conflict toward Saudi Arabia.

The fighting in Yemen pits the Houthi rebels and Saleh's supporters against Yemen's internationally recognized government of President Abed Rabbo Mansour Hadi. The Houthis seized the capital, Sanaa, in September 2014, forcing Hadi to flee first to the southern port city of Aden and later to Saudi Arabia.

The Saudi-led military coalition launched a large-scale airstrike campaign in March 2015 and later began on-the-ground military operations to retake rebel positions. The coalition has had success in driving the rebels out of some southern cities but has so far been unable to dislodge them from the capital and other strongholds in the north.

The conflict has killed some 9,000 people since March 2015 - a third of them civilians, according to the United Nations. The U.N. says more than 80 percent of Yemenis are in dire need of food, water and other aid.