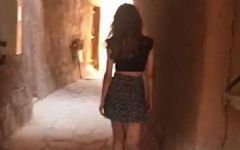 Saudi Arabia's vice and virtue police have arrested a young woman who was filmed in an archaeological site wearing a miniskirt and crop top, sparking a furious debate about the rights of women in the ultra-conservative kingdom.

In a series of short videos posted online, the unidentified woman is seen walking through an ancient fort with her long hair uncovered and her midriff exposed. She is seen mostly from behind but in one clip she faces the camera and runs a hand through her hair.

The videos led to a social media firestorm in Saudi Arabia, where most women are forbidden by law from appearing in public without a long abaya and their hair covered by a headscarf.

Police in Riyadh announced on Tuesday that they had arrested the young woman on charges of wearing "indecent clothing" and were questioning her, according to state television.

A police spokesman said the woman admitted it was her in the video clips but said that someone else posted them online.

She said that she had been accompanied by a male guardian on the trip and had not broken strict Saudi laws that forbid women from traveling alone.

The case is now in the hands of the public prosecutor who will decide whether to charge her with a crime. She faces fines and potential prison time if convicted of flouting the kingdom's morality laws.

The videos did not appear to be intended as a protest against Saudi Arabia's restrictions and looked more likely to be the work of young people in a country that is deeply conservative but also has high rates of social media use.

Both supporters and detractors of the young woman took to Twitter to debate the video, using the hashtags "wanted for trial model Khulood."

One female Twitter user wrote in Arabic: "You violated the tradition and the basic law. You are shameless. Respect your homeland. Your parents did not educate you."

Another woman countered: "If she was a foreigner they would flirt with her, talk about her nice body and her beautiful eyes. But because she is Saudi they want to try her."

The storm over the miniskirt comes at an unwelcome time for Mohammed bin Salman, Saudi Arabia's ambitious young crown prince, who is trying to present his country as in the process of modernisation.

The 31-year-old heir to the throne is the architect of Vision 2030, a plan to overhaul the Saudi economy and in the process ease of the kingdom's more austere sharia laws.

News of a young woman being arrested for wearing what would be considered normal summer wear in most Western countries is a stark reminder of how far bin Salman will need to go.

Most Saudi woman are required to cover their hair but they do not necessarily need to mask their face behind a full niqab.

Saudi Arabia's strict laws are applied only selectively to foreign women and most Western dignitaries forgo a headscarf when they visit the kingdom. Donald Trump's wife Melania and his daughter Ivanka both arrived in Riyadh in May in long dresses but with their hair uncovered. During the visit, many critics of Saudi Arabia noted at the time that Saudi men did not object to Ivanka Trump walking around uncovered and some appeared to look at her longingly.

One Twitter user pasted Ivanka's face over the young woman in the miniskirt video and captioned it simply: "Problem solved".