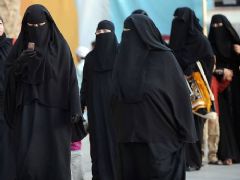 Education departments in a number of regions in Saudi Arabia have banned female employees and visitors who do not wear a face veil from entering girls' schools, the Saudi Gazette reported on Monday.

The report cited a pamphlet sent by education departments to school principals, in which male and female school guards are instructed to abide by Islamic rules, regulations and directives and moral principles.

They should avoid anything that violates the honor of the profession, the pamphlet said. The education departments said no female employee or student should be allowed to leave school before the end of school hours unless they have a written permission from the female school principal. The identity cards of drivers who transport female students in private cars should be checked.

Men should not be allowed to enter the schools except in special circumstances after checking by the female in-charge and after taking precautions to prevent mixing between genders, the instructions said, according to the Saudi Gazette.

Saudi Arabia, which has a religious police enforcing Islamic Sharia law, has a far from stellar record on women's rights, and women are forbidden from driving in the country.

A long-standing campaign aimed at getting the Saudi Arabian driving ban lifted has urged women to defy the ban. In past situations where women were caught driving, their male relatives were asked to sign statements saying they would not allow the women to drive again.

Many women have driven since the campaign was launched in 2011, some of them have posted videos of them doing so, and many have been arrested and forced to sign a pledge that they will never drive again.

Despite its violation of human rights, Saudi Arabia recently won a seat on the UN Human Rights Council, being one of several countries with questionable human rights records to win seats in this body.