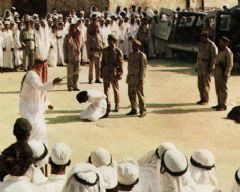 A man has been beheaded on charges of sorcery and witchcraft in Saudi Arabia after being found in possession of mystical books and talismans, the state news agency SPA has said.

Human rights organizations have repeatedly spoken out against executions in the conservative Gulf kingdom on charges of witchcraft. In September a Sudanese national was beheaded in the city of Medina after being convicted of "sorcery," while in December a Saudi woman, Amina bint Abdul Halim bin Salem Nasser, was executed in the northern province of Jawf for "practising witchcraft and sorcery," Al Jazeera reported.

"The charges of 'witchcraft and sorcery' are not defined as crimes in Saudi Arabia and to use them to subject someone to the cruel and extreme penalty of execution is truly appalling... the charge of sorcery has often been used in Saudi Arabia to punish people, generally after unfair trials, for exercising their right to freedom of speech or religion."

Foreign Policy reports that due to the lack of a penal code (and legal definition of witchcraft) in Saudi Arabia, a judge has discretion to decide whether someone can be sentenced as a witch or sorcerer.

According to the BBC, some religious leaders in Saudi Arabia have constantly demanded that the harshest sanctions be imposed on any individual suspected of sorcery. In 2010, the Lebanese presenter of a fortune-telling TV show was detained and sentenced to death whilst making a pilgrimage to Saudi Arabia, although he was later released by the country's Supreme Court following pressure from Beirut and human rights watchdogs.