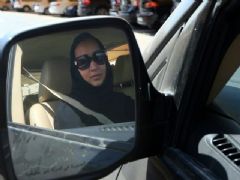 The woman, together with two male passengers, was handed over to the vice squad after intoxicating substances were found in the car. The three will be indicted for illegal driving and gender mixing.

Meanwhile, the Shura Council, Saudi Arabia's parliament, will convene next week to discuss a bill to "foster an environment conducive to legalize female driving."

Sultan al Sultan MP has asked the Ministry of Labor and Social Development and the Interior Ministry to carry out a study into the matter.

Speaking to Al Hayat newspaper, he said that his proposal was meant to alleviate difficulties of transportation that families incur given the fact that women are not allowed to drive.

In addition, he said, the cost of hiring a chauffeur often deters women from entering the labor market.

"That's why female driving has become a social issue that requires review in light of the social and security situation, on top of the behavioral consequences that children face by virtue of having a stranger around all the time," he said, providing an economic motive to boot: "More than a million foreigners work here as chauffeurs, sending their countries more than 1 billion riyal [$250 million] monthly. We would be better off if this sum was invested in developing our country."

Also on Sunday, the head of the Saudi Chamber of Commerce in the kingdom's south-east said that women "make up 50 per cent of university graduates but only 22 per cent of the workforce."

He said he hoped that Prince Mohammed's Vision 2030 plan would help reduce that disparity.