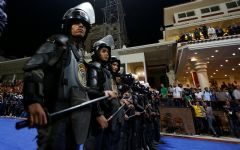 Secular blogger arrested in crackdown on free expression in Egypt

A secular blogger is the latest social media activist to be arrested in what human rights groups say is a widespread new crackdown on free expression in Egypt.

Islam al-Refaei, an edgy blogger known for his sarcastic and profane posts, was arrested last Thursday and has now been charged with membership of a terrorist group, inciting against the state, and calling for demonstrations without a permit.

Posting under the username 5orm, meaning "Hole" in Arabic, Mr al-Refaei had acquired more than 75,000 Twitter followers with his irreverent and often risquÃ© tweets of scantily clad women.

The Arabic Network for Human Rights Information (ANHRI) called his arrest "a new crime in the attacks on freedoms" and said it was clear the charges against him had been fabricated by the security services.

"A young man like Islam, known to thousands as a liberal, his Twitter or Facebook accounts shows that he cannot be accused of belonging to a political or a religious group. Enough playing with the freedoms of citizens and destroying the future of young people," the ANHRI said.

Mohamed Ibrahim, a blogger known as Mohamed Oxygen, was arrested this week while shooting a video on the street for his blog Oxygen Egypt. He was eventually released under certain conditions.

"I live under continues anxiety for fear that the police will break my house's door and arrest me under any absurd charge," Mohamed said in a post. "This feeling of fear is a general feeling among activists but we can't stop expressing our opinion."

Last Saturday, a prominent activist, Mahinour el-Masry was detained on charges of participating in an illegal protest against the government's transfer of two strategic Red Sea islands to Saudi Arabia.

A court denied her bail and ordered her to be remanded in custody while her trial goes on. She was transferred to a prison away from her hometown of Alexandria.

Several artists have also been arrested in recent weeks on charges relating to freedom of expression.

An Egyptian popstar is being held for "inciting debauchery" after releasing a suggestive video where she danced in her underwear with a banana.

Shaimaa Ahmed, 25, is known in Egypt as Shyma and was arrested on Saturday following the release of her song I Have Issues.

In the video she dances in a classroom in front of a group of men and suggestively eats a series of fruits.

"I didn't imagine all this would happen and that I would be subjected to such a strong attack from everyone," she said in an apology post on Facebook.

Wael Abbas, a prominent blogger, said the arrests, were encouraging many activists to hide their social media posts. "I noticed that the the continues oppressive campaign by the regime has intimidated many activists pushing them to turn their post into private, only seen by their friends and some has abandoned politics completely."

Earlier this week, an actor was summoned for investigation related to his movie "Sheikh Jackson" because he showed in one scene Michael Jackson dancing in a mosque.

Another famous Egyptian singer, Sherine Abdel Wahab was accused of "spreading provocative publicity" after she mocked her own song, "Have You Drunk From The Nile?" when she jokingly suggested that drinking from the River Nile water could lead to a parasites infection.

"This regime is the worst ever in Egypt modern history relating to freedom of expression," said Gamal Eid, executive director of the ANHRI.

More than 400 websites are blocked in Egypt and hundreds of secular activists and journalists are detained, while almost all media outlets have been brought to heel by the government, Mr Eid said.

"Despite the fears, there are still those with the courage to express their opinion on social media and to criticise the regime," Mr Eid said.