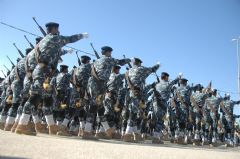 Security forces opened fire on protesters in Baghdad and several cities in southern Iraq on Sunday, killing at least nine people and wounding dozens of others, police and medical sources said, the latest violence in weeks of unrest.

Anti-government protests erupted in early October and have swollen into the largest demonstrations since the fall of Saddam Hussein in 2003. A Reuters tally of the dead as given by security and medical sources shows at least 339 people have been killed.

Iraq's state news agency quoted the health minister on Sunday as saying 111 people had been killed, including protesters and members from security forces, without breaking down the tally or elaborating over what period. It was the first official figure issued by a government official since Oct. 25.

A government report last month had said there were 157 deaths during the first week of October. Protests paused after then and resumed on Oct. 25.

Protesters are demanding the overthrow of a political class seen as corrupt and serving foreign powers while many Iraqis languish in poverty without jobs, healthcare or education.

Police and health officials said three people were killed, and hospital sources said another person died later from bullets wounds to his head.

More than 50 others were wounded, mainly by live bullets and tear gas canisters, in clashes in the city, they added.

Three people were killed and around 90 wounded near the Gulf port of Umm Qasr near Basra when security forces used live fire to disperse protesters, police and medical sources said.

The protesters had gathered to demand security forces open roads that authorities have blocked to try to prevent protesters from reaching the port's entrance.

Protests flared anew on Sunday on the street when security forces used live fire and tear gas to prevent protesters from trying to reach the road leading to the central bank. At least 15 protesters were wounded, police and medical sources said.

Protesters set fire to a police vehicle in the city centre. At least 35 people were wounded by rubber bullets and tear gas canisters shot by security forces, said a Reuters reporter.

Protests continued in other southern regions, including Diwaniya, Kut, Amara and Najaf and schools and offices were partially opened on Sunday.

Security forces also wounded at least 24 people in the Shi'ite holy city of Kerbala overnight after opening fire on demonstrators to prevent them from reaching the local government headquarters, medical and security sources said.