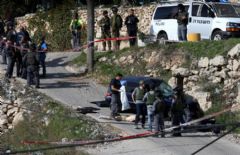 The scene where a Palestinian driver rammed into Israeli soldiers In the West Bank village of Biet Ommar, north of Hebron

A Palestinian assailant rammed into six IDF soldiers Friday afternoon as they stood on the side of the road, near the entrance of the Palestinian village of Beit Umar, that is located off of Route 60 in between Gush Etzion and the West Bank city of Hebron.

The assailant was shot and killed while he was still in his car. A Palestinian flag lay on the seat of his blue vehicle. According to Palestinian reports, he was Issa Arafat, 18, Beit Umar.

Two of the injured soldiers were officers. One was treated at the scene and the others were evacuated to Sha'are Tzedek Medical Center in Jerusalem by Magen David Adom with moderate-to-light injuries.

Security forces arrived to the area where clashes broke out with Palestinian protesters throwing rocks and Molotov cocktails, creating difficulties for emergency workers treating the wounded. Security forces were using crowd dispersal measures on the rioters. No Israeli injuries were reported in the ongoing clashes.

Authorities closed Route 60 in both directions leading to and from Beit Umar.

Just two days earlier, a soldier was stabbed and seriously wounded at a checkpoint at the al-Fawwar junction in the South Hebron Hills region of the West Bank. It is located on the other side of Hebron from Beit Umar.

The 20-year-old soldier was checking cars, when a Palestinian terrorist launched himself from one of them and stabbed the soldier in the neck. A fellow soldier shot and wounded the attacker.

In response to the number of attacks at the Gush Etzion junction and along Route 60, which runs through Gush Etzion, area residents held an open air market on Friday afternoon where they sold wine, clothing, toys, jewelry and ceramics.

Earlier Friday, two IDF soldiers were wounded in a vehicular-ramming terror attack near the West Bank settlement of Kfar Adumim, which is located along Route 1 as it heads from Jerusalem to the Dead Sea.

According to the IDF, the soldiers were in moderate condition. The suspected assailant was shot and killed at the scene.