U.N. Inaction on Democratic People's Republic of Korea
All Actions of the UN Human Rights System Critical of Specific States, 2018 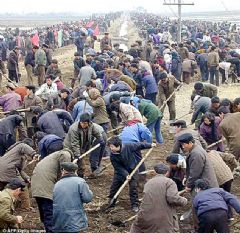 Six North Koreans were executed by firing squad after trying to smuggle out the nation's phonebook, it has emerged.Â

The residents from the capital Pyongyang were executed at the end of last year on the charge of treason for attempting to leak the contents of a directory to the outside world.

Their relatives were booted out of the city and exiled in the countryside. North Korea's phonebook is considered a secret document.

It contains the phone numbers of factories and companies, managers, party chairmen and other high-ranking officials and office numbers and can sell for up to around Â£5,700 in China.

A source told website Daily NK that the decision highlights the determination of the authorities to maintain internal information security.

'The authorities relayed the message to legal organisations through lecture materials stating that, 'At the end of last year, six Pyongyang residents who attempted to distribute a phonebook outside of the country were executed.'

'The point was emphasised that those who commit such acts can be punished at any moment,' a high-ranking source in the capital told Daily NK during a telephone call.

'The lecture materials explained: "A phonebook can be sold for 50,000 yuan in Chinese money. These individuals chose to commit treason in order to avoid working hard to earn money".'

The seriousness with which the punishment was enforced is thought to be related to the fact that the crime was committed in Pyongyang, the 'Revolutionary Capital' where the country's most loyal subjects supposedly reside.

'The families of the six executed individuals were deported to the Hwanghae Province area,' a separate source in Pyongyang said.

'The leadership of the country's party, military, and political leadership is all concentrated in the city of Pyongyang.Â

Many cadres who go in and out of the country also reside in Pyongyang.Â

That explains why the authorities reacted so strongly in order to prevent information about them from leaking out of the country.'