U.N. Inaction on Qatar
All Actions of the UN Human Rights System Critical of Specific States, 2015 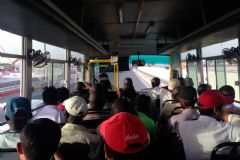 In Qatar, where at least one immigrant worker dies per day working to complete its World Cup infrastructure by 2022, workers were bused in to run a marathon in whatever clothes they had in order to break a Guinness World Record.

In an effort to break a Guinness World Record, a Qatari sports club reportedly bused in migrant workers and forced them to run in a state-sponsored "megamarathon" in Doha last Friday.

Many of the workers were said to have run the race in flip-flops and jeans and, according to Doha News, some laborers "tried to leave but were turned back and were yelled at that they need to stay and cross the line."

According to the race's official site, the marathon was created to illustrate a "decisive response to the campaign waged by the sector of envious haters on the success of Qatar to host the 2022 FIFA World Cup, and to their false allegations of persecution of workers and residents in our beloved country."

Amnesty International has said that migrant workers face "rampant" and "severe" exploitation, including physical and sexual abuse, under Qatar's "kafala" system, which ties migrant workers to their employer regardless of the work entailed. If the worker opts not to do the job, he or she is often stranded in the country without an "exit permit" that would allow him or her to pursue other work.

Nicholas McGeehan, a Qatar researcher at Human Rights Watch, also said that workers frequently forfeit their passport to their employer “immediately upon arrival in the country," leaving them with no way to leave or make money in Qatar.

"I'm appalled, but not shocked," McGeehan told The Daily Beast. "Forcing people to compete in an endurance event should raise eyebrows. [The Qatari government] has an insidious level of racial discrimination against migrant workers."

Organizers say they had brought in observers from the Guinness Book of World Records for the event, as the race aimed to "enter Guinness World Records with the Largest Marathon in the world after it was confined to the United States of America." The race needed 50,000 participants to achieve its goal.

The event failed to break the record.

"It's not the most serious thing that's going on, but it gets precisely to the nub of what's problematic here," said McGeehan.

"Most migrant workers can't leave their employer no matter what happens. They're deportable at any moment, they're very exploited, and it's very difficult for them to access the justice system. When you put it together as a mix, it's a highly toxic combination," said McGeehan.

That's why migrant workers who may have wanted to quit-or never even begin-the marathon may not have had an option to stop running. A spokesman for the Al-Sadd Sports Club, who bused in the runners, told the Daily Telegraph, "If they didn't want to run, we advised them to go to their buses." At least one witness told the Telegraph that the workers were ordered to keep running.

Al-Sadd runs the Al-Sadd Football Club, the winningest soccer team in the most competitive league in Qatar, the Qatari Stars League.

"Let's go back to what we're dealing with: You don't have a choice what you're doing-whether it's a violation of dignity, or if it's a danger to your welfare. If their employer wants to make them skydive, he can. That's part of what the problem is here. This labor system enables this deathly inhumane system," McGeehan told The Daily Beast.

The marathon's Facebook page, which had been riddled with complaints by participants, has been deleted. One volunteer on the Facebook page said that staff was told to stop handing out water bottles to participants.

The event was initially set to take place on February 10 on Qatar's National Sports Day. "Acknowledging its great importance, the wise Government has allocated a National Sports Day to shed the lights on the importance of the regular exercising," the marathon's official page states.

The race actually took place on March 27, and didn't start until 2 p.m., when the day's temperature reached its daily high of 84 degrees.

Despite allegations by a whistleblower that FIFA had been "bribed" by the Qatari government to host the World Cup in 2022, it was announced in November that a separate international sports event, the World Championships in Athletics, will be held in DOHA in 2019.

McGeehan believes that the international spotlight on the kafala system is a "double-edged sword."