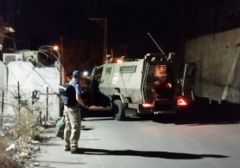 Two terrorists wielding a knife attempted to stab IDF soldiers in the West Bank city of Hebron on Tuesday night.

One soldier sustained light wounds in the incident.

In response, the other soldier shot both of the attackers dead.

Tuesday saw a number of attacks as a recent spike in violence has continued for some three weeks.

Earlier Tuesday, a Palestinian terrorist lightly wounded an IDF soldier and an Israeli civilian in an attempted vehicular ramming and stabbing attack at the Gush Etzion Junction in the West Bank.

After ramming his car into the pedestrians, the assailant then emerged from his vehicle, brandishing a knife. In response, an IDF commander opened fire on the perpetrator, striking and killing him.

In another attack earlier in the day, a Palestinian terrorist stabbed and lightly wounded an IDF officer near the West Bank town of Bet Awwa, close to the Green Line and near the southern Israeli district of Lakhish.