U.N. Inaction on Sudan
All Actions of the UN Human Rights System Critical of Specific States, 2009 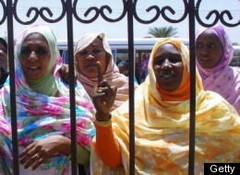 CAIRO (AP) - Sudanese police arrested 13 women in a raid on a cafe and flogged 10 of them in public for wearing trousers in violation of the country's strict Islamic law, one of those arrested said Monday.

The 13 women were at a cafe in the capital, Khartoum, when they were detained Friday by officers from the public order police, which enforces the implementation of Sharia law in public places. The force, which is similar to the Saudi religious police, randomly enforces an alcohol ban and often scolds young men and women mingling in public.

One of those arrested Friday, journalist Lubna Hussein, said she is challenging the charges, which can be punishable by up to 40 lashes.

"I didn't do anything wrong," Hussein said. Islamic Sharia law has been strictly implemented in Sudan since the ruling party came to power in a 1989 military coup. Public order cases usually involve quick summary trials with sentences carried out shortly afterward, as was the case with 10 of the women arrested Friday. They were flogged and fined 250 Sudanese pounds, or about $120.

Hussein and two other women chose to go to trial. On Monday, she was summoned for questioning and now she awaits a decision from the prosecutor on when the case could go to trial.

Women in northern Sudan, particularly in Khartoum, dress in traditional outfits that include a shawl over their head and shoulder. Western dress is uncommon.

Still, the raid on a Khartoum cafe popular with journalists and foreigners was unusual.

Hussein's lawyer, Nabil Adeeb, said action by the public order police is often arbitrary and aims "from time to time to let people know that big brother is watching you."

Hussein said she decided to speak out because flogging is a practice many women endure in silence. She even sent printed invitations to the press and public figures to attend her expected trial.

"Let the people see for themselves. It is not only my issue," she said. "This is retribution to thousands of girls who are facing flogging for the last 20 years because of wearing trousers," she said. "They prefer to remain silent."