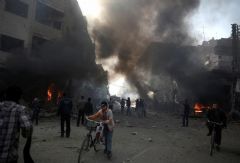 Syrians gather at the site of an air strike in the rebel-held area of Douma, east of the capital Damascus, on November 7, 2015 (AFP Photo/Abd Doumany)

At least 23 Syrian civilians were killed Saturday in suspected Russian air strikes on a rebel-held town outside Damascus, a monitor said.

Elsewhere, the Islamic State group freed 37 Syrian Christians who were among more than 200 people kidnapped in February, an NGO said.

The strikes on the rebel district of Douma hit the centre of the town where markets are regularly held, the Syrian Observatory for Human Rights monitor said.

They appeared to have been carried out by Russian planes participating in an aerial campaign that began on September 30, the Britain-based group said.

Rebels in Douma, which lies in the opposition stronghold of Eastern Ghouta, regularly fire rockets into the capital and the area is frequently the target of government air strikes and shelling.

The Observatory said at least six children and seven women were among the dead and that the toll could rise further because of the number of people seriously wounded.

An AFP journalist saw rescue workers trying to put out fires and several vegetable carts that had spilled onto the streets, their wares mixed with the rubble from damaged buildings.

In a field clinic, a child lay on a bed, a tube taped into the side of his bare and bloodied ribcage as medical workers tried to assess him.

Nearby, a man with a chunk of flesh gouged out of his left leg moaned and held his head as doctors worked on him.

Last month, at least 70 people were killed in a single day of bombing on the town, according to Doctors Without Borders.

And in August, 117 people were killed there in one day of air raids, causing a global outcry.

Meanwhile, the Islamic State group freed a group of Assyrian Christians who had been taken hostage in northeastern Syria, an NGO said.

The group consisted of 27 women and 10 men, most of them elderly, the Assyrian Monitor for Human Rights.

They arrived Saturday morning in the town of Tal Tamr in the Khabur region of Hasakeh province in northeastern Syria, the group said.

The releases were confirmed by the Observatory, which said most of those freed were from other towns in Khabur.

The former hostages were among a group of 220 Assyrians captured by IS when they overran parts of the region in February.

Since then, a trickle of prisoners has been released, with between 140 and 150 believed to be still held by IS.

The Assyrian Monitor said the releases were the result of negotiations carried out by the church, but other reports suggest IS has been paid to free the hostages.

Assyrians numbered about 30,000 among Syria's 1.2 million Christians before the country's conflict began. They lived mostly in 35 villages in Hasakeh.

In February, IS overran many of the villages, but Kurdish forces later expelled them.

Also Saturday, the Observatory said the toll in Thursday air strikes on the town of Albu Kamal on the border with Iraq had risen to 71 people, at least 53 of them civilians.

The other 18 people killed were too badly burned to be initially identified, the group said.

Russia, Syria's government and a US-led coalition are all carrying out bombing in Syria, sometimes in the same areas.