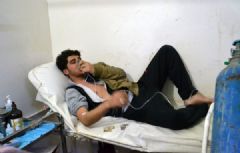 Syrian activists and a doctor reported Thursday of new suspected chemical attacks in the northwestern province of Idlib, leaving several dozens of people suffering from asphyxiation. Mohammed Tennari, a doctor who testified before the U.N. Security Council last month after treating a number of victims in Idlib from an earlier chemical attack, said there were at least three separate attacks in the province that injured nearly 80 people.

Tennari, who spoke with The Associated Press from near the border with Turkey, shared field reports from doctors in the three villages that were reportedly hit. The reports said government helicopters dropped barrel bombs containing chlorine on the villages of Janoudieh, Kansafrah, and Kafr Batiekh on Thursday.

Tennari is on his way back from the United States where he reported to the council on a suspected chlorine attack in March that killed three children and their grandmother in the same province. He is the coordinator for the Syrian American Medical Society, which has volunteer medical personnel treating victims and reporting on attacks in Syria.

Also, the Syrian Network for Human Rights, another monitoring group which is based outside the country, reported the three different attacks, sharing on Twitter images it said were from field hospitals where victims were taken. The group reported that 69 people were injured in the attacks.

The reports could not be independently verified. There has been an increase in reports of suspected chlorine bombs amid intensified fighting in the province where the rebels have made significant advances against government troops in recent weeks. Rebel fighters seized the provincial capital and weeks later moved in on a strategic town near the border with Turkey. The government has vowed to restore control.

Tennari said a man in his thirties died Thursday from another suspected chlorine attack in a fourth village in Idlib on May 2. The man's six-month-old baby died in that attack, Tennari said.

Despite condemning such attacks, the United Nations has been unable to follow through with action or assign blame. The rise in attacks comes as the United States is leading an effort to create a way to attribute blame.

On Thursday, the current council president, Lithuanian Ambassador Raimonda Murmokaite, said a "large majority" of members support the U.S. effort and are ready to move quickly in the next few days. But Syria ally Russia worried whether it will be objective, with Ambassador Vitaly Churkin telling the AP, "They've done their attribution of blame already."

The U.S. and some other council members accuse Syria's government of using chlorine against its own citizens, saying that no other party in the conflict has the helicopters to deliver such weapons. Russia has insisted that more evidence is needed to blame anyone.

Even though the Security Council, badly divided on Syria, came together in 2013 to rid Syria of its chemical weapons program, chlorine was not included in that effort. The chemical does not have to be declared because it is also used for regular purposes in industry. Chlorine is a poisonous chemical element used as a bleaching agent and for water purification, but in more concentrated form can cause victims to suffocate.

The reports of new attacks came after the International Committee for the Red Cross director of operations, Dominik Stillhart, warned on Thursday that the humanitarian situation in Syria has deteriorated sharply amid intensified fighting in several parts of the country between government forces and rebel groups, as well as among rival opposition faction.

"The fighting is escalating in many parts of the country and more and more people are being forced to flee their homes. It is causing untold suffering," said Stillhart.

Stillhart finished a two-day visit to the Syrian capital, Damascus, where he met government officials, appealing for more access to areas affected by the fighting, including the violence-torn, besieged Palestinian refugee camp of Yarmouk on the outskirts of Damascus. The camp has been the scene of clashes between local fighters and the Islamic State group since the beginning of April. It was the latest tragedy to engulf the camp's residents, who have already suffered through a devastating two-year government siege, starvation and disease.

About 18,000 people are still in the camp, a built-up area once home to some 160,000 Palestinians and Syrians. The United Nations over the weekend expressed alarm over the continued fighting, along with the use of heavy weapons, and airstrikes.

Fighting has also intensified elsewhere in Syria in recent weeks, as rebel advances have pushed out government forces from contested areas in the country's south and north. Government troops are pushing back.

On Thursday, Syrian government forces and allied fighters from the Lebanese Hezbollah group took control from Islamic militant fighters of more areas near the Syrian border town of Assal al-Ward.