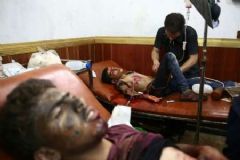 The Syrian Observatory for Human Rights, a Britain-based monitoring group, said at least 200 people were also injured in a string of 10 strikes on the rebel-held town of Douma overnight.

Civilians accounted for most of those killed, it said, and the death toll was expected to rise further because many of the wounded were in serious condition.

Observatory director Rami Abdel Rahman said locals had gathered after a first strike hit a market in the town to help evacuate the wounded when the additional raids hit.

At least six raids hit the market, with the others striking nearby in the centre of town, Abdel Rahman said.

A video posted online by activists of the aftermath of the attacks showed an intersection strewn with rubble and twisted metal.

Douma lies in the rebel bastion of Eastern Ghouta, a region outside the capital that is the regular target of government air strikes.