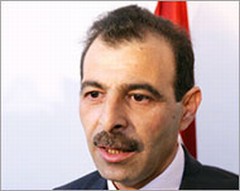 "Anwar al-Bunni, a prominent human rights lawyer, was sentenced Tuesday by a Syrian court to five years in prison for "spreading false information damaging the country," his lawyers said.

The sentence was one of the harshest meted out in Syria's yearlong crackdown on government critics.

Razan Zaitouneh, a lawyer for Mr. Bunni, said her client had been sentenced for "spreading false information" in writings and comments saying Syrian prisons practiced torture.

Mr. Bunni's lawyers and human rights campaigners said the verdict appeared to be a warning to the opposition in Syria.

"It was a message to the entire opposition movement: pursue democracy, get punished," Ms. Zaitouneh said.

Mr. Bunni was one of several opposition figures arrested last May after signing a petition calling for Syria to recognize Lebanon's independence.

The government has been cracking down on critics, who became more vocal after the killing of Rafik Hariri, the former Lebanese prime minister, in which the United Nations implicated Syria."