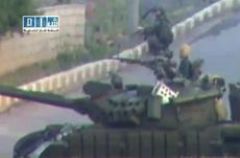 Source: USA Today
YouTube via AFP/Getty Images
A Syrian army tank and a soldier take position as troops storm the town of Daraa.

(NewsCore) - DARAA, Syria -- Thousands of troops backed by tanks swept into the flash point Syrian town of Daraa on Monday killing 25, while the embattled regime sealed the country's southern border with Jordan.

"There are still bodies sprawled in the streets," an activist told AFP, as loud explosions and shooting could be heard in the background.

Activists said the military force was made up of 3,000 soldiers including snipers. "Bodies are lying in the streets and we can't recover them," said one protester.

A resident told Al Jazeera that security forces were firing randomly at houses. "Witnesses have told me that there have been five deaths so far and houses have become hospitals," the resident said, with images showing a cloud of black smoke over the town and Syrian troops advancing behind tanks.

A witness told AFP that the five dead people were in a car that was "riddled with bullets."

The witness added, "The minarets of the mosques are appealing for help. The security forces are entering houses. There is a curfew and they fire on those who leave their homes. They even shot at water tanks on roofs to deprive people of water." Jordan's information minister said Syria sealed the southern border hours after troops entered Daraa.

"Syria closed its land borders with Jordan. The Syrian decision is related to the internal situation in Syria," Taher Adwa told the state-run Petra news agency. "We hope movement at the border goes back to normal soon."

A witness on the border told AFP he could see tanks blocking the road to Daraa, just three miles (five kilometers) away. Activists said it was hard to get a clear picture of what was going on in the town, as electricity was cut off and telephone services were almost entirely blocked. Most foreign correspondents have been ejected from the country.

A similar raid was also reported in Douma, a large suburb of Damascus. "Security forces have surrounded a mosque and are firing indiscriminately. Streets are cut off from each other and Douma is isolated from the outside world," an activist said, adding that there have been sweeping arrests in the town since Sunday.

The protests against the regime started in Daraa on March 15, where dozens of Syrians have been killed in the violent repression of demonstrations by the security forces.

Over the weekend, crackdowns in cities across the country saw some 120 people killed, an opposition group said, even after President Bashar al Assad lifted the hated emergency law used to silent dissent last week.

The US is readying sanctions against senior Syrian officials, with Europe urged to follow suit, The Wall Street Journal reported Monday.

The outpouring of resentment and anger by Syrian citizens has surprised many observers, and the violence unleashed against protesters has shaken the support of countries that have long sought engagement with Syria, such as France and the UK.

"We don't see how Assad can push this genie back in the bottle," a senior European official told the WSJ. "It's too late for him to get ahead of the curve politically."