U.N. Inaction on Uganda
All Actions of the UN Human Rights System Critical of Specific States, 2011 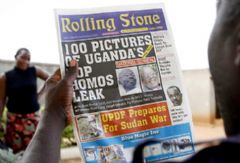 Source: NY Daily News
David Kato, Ugandan gay actvist was murdered after his photo and address were published in a tabloid.
In this Oct. 19 2010 photo, a man reads the headline of the Ugandan newspaper "Rolling Stone," in which the paper reveals the identity of allegedly gay members of Ugandan society and calls for public punishment. David Kato's photo appears on the top left. (AP)

DAVID Kato knew he was a marked man.

As the most outspoken gay rights advocate in Uganda, a country where homophobia is so severe that parliament is considering a bill to execute gay people, Mr Kato had received a stream of death threats, his friends said.

A few months ago, a newspaper ran an anti-gay diatribe with Mr Kato's picture on the front page under a banner urging, ''Hang Them''.

On Wednesday, Mr Kato was beaten to death with a hammer in his rough-and-tumble neighbourhood of Kampala. Police were quick to chalk it up to robbery, but members of the besieged gay community in Uganda suspect otherwise.

''David's death is a result of the hatred planted in Uganda by US evangelicals in 2009,'' Val Kalende, chairwoman of a gay rights groups, said in a statement. ''The Ugandan government and the so-called US evangelicals must take responsibility for David's blood.''

Ms Kalende was referring to visits in March 2009 by a group of American evangelicals, who held rallies and workshops discussing how to turn gay people straight, how gay men sodomised teenage boys and how ''the gay movement is an evil institution''.

The Americans involved said they had no intention of stoking a violent reaction. But the anti-gay bill was drafted shortly thereafter. Some of the Ugandan politicians and preachers who wrote it had attended those sessions and said they had discussed the legislation with the Americans.

After growing international pressure and threats from European countries to cut aid, President Yoweri Museveni indicated the bill would be scrapped.

But more than a year later, that has not happened, and the legislation remains a simmering issue in parliament. Some political analysts say the bill could be passed in the coming months, after an election in February that is expected to return Mr Museveni, who has been in office for 25 years.

Many Africans view homosexuality as an immoral Western import, and the continent is full of harsh homophobic laws. In northern Nigeria, gay men can face death by stoning. In Kenya, considered one of the more Westernised nations in Africa, gay people can be sentenced to years in prison.

Uganda's Minister for Ethics and Integrity, James Nsaba Buturo, who describes himself as a devout Christian, has said, ''homosexuals can forget about human rights''