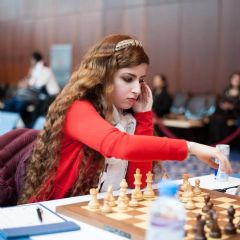 To most observers, nothing stood out about Dorsa Derakhshani last month when she competed at the Tradewise Gibraltar Chess Festival. The 18-year-old female grand master fared fine on the board, twice using the Four Knights defense, and looked like any other teenager you might see in the British territory that borders southern Spain.

But to the head of the Iranian Chess Federation, Derakhshani practically committed an act of treason.

Mehrdad Pahlevanzadeh didn't have a problem with Derakhshani's play, but her headwear. Derakhshani wore a simple headband in her long hair, instead of a hijab, Iran's traditional headscarf, which became a compulsory accessory for women after the 1979 revolution. As a result, Pahlevanzadeh announced on Monday that Derakhshani would be kicked off the national team.

Derakhshani's younger brother Borna, 15, who also entered the tournament, was also kicked off the team. His offense was agreeing to play an Israeli opponent, a strict no-no in the country that doesn't recognize Israel as a state.

"Unfortunately, what shouldn't have happened has happened," Pahlevanzadeh told the semiofficial Fars News Agency on Monday (via Radio Free Europe). "Our national interests have priority over everything."

"As a first step, these two will be denied entry to all tournaments taking place in Iran," he continued, "And, in the name of Iran, they will no longer be allowed the opportunity to be present on the national team."

Neither sibling has commented publicly on the news.

That the two young chess masters received such a harsh punishment is not a surprise. Sports in Iran and other parts of the Middle East have long been affected by the region's strict cultural norms and precarious political stance.

Last year, American chess master Nazi Paikidze did not compete in the chess world championships in Iran because of the country's requirement that she don a hijab.

"Some consider a hijab part of culture," Paikidze said in an Instagram post announcing her decision. "But, I know that a lot of Iranian women are bravely protesting this forced law daily and risking a lot by doing so. That's why I will NOT wear a hijab and support women's oppression."

The hijab made different headlines earlier in the year, however, when U.S. fencer Ibtihaj Muhammad became the first American to win a medal wearing the traditional headscarf. Muhammad earned a bronze in the team saber event alongside hijab-less athletes Monica Aksamit, Dagmara Wozniak and Mariel Zagunis.

"I have to challenge this idea that in some way we don't belong because of our race or our religion," Muhammad, whose parents converted to Islam before Muhammed was born, said last year.

She added: "Like within any religion, Muslims have conservatives, we have liberals, and we have everything in between. To paint all Muslims with one broad stroke can be frustrating."