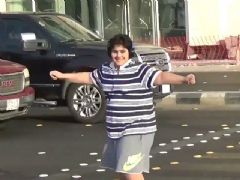 Teenager Arrested in Saudi Arabia for Dancing the ‘Macarena’

A 14-year-old boy in Saudi Arabia was arrested by authorities after a year-old video emerged of him dancing to the Spanish-language song the "Macarena" in the port city of Jeddah.

In a statement, authorities confirmed they had arrested the teenager on grounds of "improper public behavior" and for disrupting traffic.

During the 45-second video, theÂ teenager, wearing a striped T-shirt, gray sports shorts, and brightly colored shoes walks to the middle of a crossingÂ and starts dancing to the song in front of five cars waiting at the traffic lights.

Despite Saudi Arabia being known for itsÂ ultra conservative Islamic attitudes towardsÂ anything sexually suggestive, the country claimed the incident was merely a safety riskÂ and asked his guardians to sign a pledge before his release.

"They signed a written pledge that the teen will not engage in behavior that could endanger his life and the life of others again," the ministry said. "The notification was solely intended to warn the boy about potential consequences for his own safety, as well as to safeguard the overall safety of motorists and pedestrians."

According to theÂ SaudiÂ OkazÂ newspaper, the boy simply "was showing off" as part of a stunt to impress his friends.

This month, policeÂ arrestedÂ Saudi singer Abdallah Al Shahanifor for using the "dab" move during a performance at a music festival in the city of Taif in south-westernÂ Saudi Arabia, a dance move which involves pointing one's arm upwards whilst also bowing their head into their other arm. He was later released.

In July, a young woman wasÂ arrestedÂ for wearing "suggestive clothing" after a Snapchat video emerged of her wearing a miniskirt. She was alsoÂ releasedÂ without charge.

Saudi Arabia is notorious for its regressive treatment of women, where Sharia LawÂ dictatesÂ that women must not freely interact with men, drive a car, practice sports, or even go for a swim. All women must also wear a hijab, while many are forced to wear burqas, where only their eyes are visible.