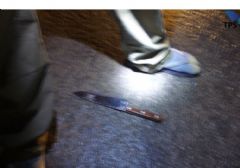 One soldier was stabbed and his two assailants killed in a terrorist attack at the Gush Etzion junction Tuesday evening in another day of violence in the West Bank.

Later, in a separate incident, soldiers killed a Palestinian assailant who pulled a knife on them at a checkpoint near the Tel Rumeida neighborhood of Hebron, in a section of the city under Israeli military and civil control.

Earlier in the day, some 1,000 Palestinians rallied in Hebron to demand that Israel return the bodies of 11 assailants killed by its security forces this month. The cabinet decided to delay the return of the bodies until calm is restored in the West Bank amid fears the massive funerals for the attackers, who the Palestinians view as martyrs, would incite further attacks against Israel.

The IDF said the rally turned violent, with Palestinians burning tires and throwing stones and bottles at the soldiers.

Photos showed masked Palestinians with slingshots and fire shooting out from stacks of tires.

Video footage posted on YouTube showed what looked like thousands of protesters waving Palestinians flags and photos of the Palestinians killed by the IDF and Border Police in recent violence.

Protesters filled the streets near the Policeman's checkpoint, on the side of the city under the control of the Palestinian Authority, chanting "Palestine," "Al-Aksa" and "Allahu Akbar," as IDF soldiers looked on warily.

The IDF broke up the rally in a massive barrage of tear gas and stun grenades, as well as rubber and .22 caliber bullets. Video footage showed protesters fleeing in all directions with in seconds.

According to the Palestinian Red Crescent, some 87 Palestinian were wounded from tear gas inhalation; 44 from rubber bullets; and 20 from live ammunition.

Hebron and Gush Etzion have been the scene of numerous violent Palestinian attacks and riots in the last few days.

On Tuesday evening, soldiers stopped two suspicious looking Palestinians at the busy Gush Etzion junction, and one of whom stabbed a 19-year-old soldier of the Shimshon unit, who was guarding the area. Other soldiers from the unit opened fire and killed the two attackers; Palestinian social media showed the bodies of the two young men lying in pools of blood by the bus stop.

Jabar Assat, a Magen David Adom paramedic, said the soldier had facial wounds and was transported to Shaare Zedek Medical Center in Jerusalem.

"When we arrived, he was conscious and standing," said Assat, who added that an IDF medical team treated the soldier at the scene, before he was placed in an ambulance.

Sections of Route 60 were temporarily shut down as a result of the incident.

Gush Etzion Regional Council head Davidi Perl, who arrived at the scene, said the attack would not deter area residents from continuing with their normal lives.

"We will continue to live here and fight terrorism. We will not give up," Perl said.

This was the second such incident on Route 60 this week. On Monday, closer to Hebron near the entrance to the Palestinian village of Beit Einun, a Palestinian stabbed and seriously injured a soldier.

In the Gush Etzion region on Sunday, a Palestinian stabbed and moderately wounded an Israeli civilian near the settlement of Metzad after he exited his vehicle because Palestinians had thrown rocks at it.