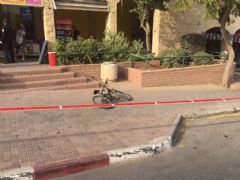 The bicycle a 13-year-old boy was riding before he was stabbed in the Pisgat Ze'ev neighborhood in Jerusalem on Oct. 12, 2015.

Terrorist Shot After Attempted Gun-Snatching From IDF Soldier In Jerusalem

A Palestinian man on an Egged bus stabbed an IDF soldier while attempting to steal the soldier's gun on Monday night in Jerusalem, according to police.

Security forces shot dead the suspected terrorist. The soldier was taken to a hospital in light-to-moderate condition.

According to police, when the attacker failed to snatch the soldier's weapon, he then tried to choke the soldier, took out a knife and stabbed him.

While the bus was stopped near the capital's International Convention Center, a citizen struggled with the suspected terrorist. Police that were on the scene nearby entered the bus.

A police officer then struggled with the suspected terrorist, who managed to apprehend his gun.

Afterward, additional police forces arrived to the scene, saw the terrorist with the pistol, and shot him dead.

Following the attack shortly after 9 p.m., the entrance to the city was closed by police.

The latest attack served as the fourth in the span of 12 hours on Monday, bringing Jerusalem to its highest state of alert in years.

Meanwhile, a 13-year-old Jewish boy remained in critical condition after being stabbed nearly a dozen times by two teenage Palestinian terrorists during the third attack at approximately 3 p.m., in Jerusalem's Pisgat Ze'ev neighborhood According to the Shin Bet (Israel Security Agency), the two Palestinian suspects who carried out the attack are cousins, aged 13 and 15, and live in east Jerusalem's Beit Hanina neighborhood. Neither youth has prior records of security-related incidents, the Shin Bet said.

"Both terrorists attacked the boy while he was riding his bicycle, and stabbed him many times all over his body before a driver neutralized the 13-year-old terrorist by ramming his car into him," Rosenfeld said.

"The other assailant then stabbed a 24-year-old Jewish man nearby before being shot dead by police."

Magen David Adom paramedics arrived at the scene moments later, and rushed the boy and second victim, who was in serious condition, to Shaare Zedek Medical Center in Jerusalem as police cordoned-off the area, Rosenfeld said.

The 13-year-old Arab assailant was also transferred to an area hospital in serious condition, he said.

Less than an hour earlier, a Palestinian woman was shot after stabbing a Border Police officer near the capital's police headquarters. Rosenfeld said that attack took place at approximately 2:15 p.m., near the Ammunition Hill light rail stop, when the unidentified suspect stabbed the officer on a sidewalk.

"Officers on the scene shot the woman immediately and cordoned off the area," he said. "The officer was treated by Magen David Adom paramedics and rushed to an area hospital in light-to-moderate condition."

Rosenfeld said the suspect was seriously injured and has also been hospitalized.

During the day's first attack around 9 a.m., a Palestinian terrorist was shot and killed near Lion's Gate, in the Arab Quarter of Jerusalem's Old City, after attempting to stab a Border Police officer.

The assailant, whom police deemed suspicious, was asked to stop for a spot inspection before pulling a knife from his pocket and charging one of the officers, stabbing him in his metal breastplate, Rosenfeld said.

Amid the capital's ongoing wave of violence, acting police Police Chief Bentzi Sau on Sunday ordered 1,000 extra highly-trained Border Police officers to be dispatched to the Old City and flashpoint Arab neighborhoods to assist the 3,500 officers presently on the ground.

In a statement following Monday's third attack, Barkat condemned the depravity of the terrorists.

"To our shock and horror, the cruelty of murderers who attack innocent civilians and children on their way home from school knows no limit, confronting us all with a shocking form of evil," he said.

"This cruel and merciless terrorism is the result of incitement and inflammatory lies. We must act swiftly and decisively both against the terrorists, as well as against those who are spreading this incitement."

Barkat added that he has beseeched Prime Minister Benjamin Netanyahu to immediately take more aggressive action. "I call on Prime Minister Netanyahu to implement more severe means and to take strong action against those who are inciting terrorism with their inflammatory statements and messages," he said.

"I would like to commend and thank the security forces, security guards and dedicated citizens who took swift action in all of the recent events, bravely neutralizing terrorists and stopping killing sprees." The mayor went on to call on residents to unite and remain strong in the face of the ongoing terrorism.

"I ask the public to act in a vigilant and responsible manner, and most of all to demonstrate unity, strength and determination in this war against lone-wolf terrorists," he said.

"I wish our wounded a speedy recovery. We will continue with our routine in this current situation, with maximal vigilance, and while continuing our fight against terror with unwavering determination." Meanwhile, the West Bank saw a drop in the number of clashes between Palestinians and the IDF on Monday.

The biggest clash occurred near Kikar Ayosh between Ramallah and Bet El, where hundreds of rioters threw rocks and rolled burning tires at soldiers, who responded with crowd control measures.

In Rachel's Tomb near Bethlehem, a Border Policeman shot and struck a Palestinian rioter who was hurling a firebomb at security forces.

Several minor clashes involving tens of rioters occurred in the northern West Bank, and in the regions of Etzion, Ephraim, and Binyamin.

"Police continue to step up security and will continue to prevent or neutralize terrorists who carry out attacks," he said.