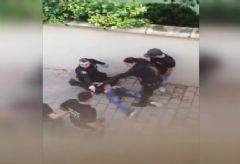 Terrorist Stabs 4 Israelis, Including Woman in Her Kitchen

Just imagine: You are standing alone in your kitchen, cooking, and suddenly a terrorist appears. That is precisely what happened to Dikla Dvir, 46, at her home in Raanana on Saturday as a knife-wielding terrorist rampaged through the city.

"I was in the kitchen and the terrorist came in through the sliding glass window and stood right next to me," Dvir recalled. "I asked him what was happening because I thought he was a burglar, but while I was asking he started stabbing me. I pushed him out and quickly locked the window while my husband and youngest son ran all around the house locking doors. I called the police to report the incident. Within several minutes the police were here, and they caught him just beyond our fence, because he jumped out."

Dvir's ordeal was the culmination of a terror spree that left four people hurt, including Dvir herself.

The spree began on Saturday afternoon in a public playground in the normally peaceful city of Raanana. "I saw a young man approach a park bench where a man and a woman were sitting and stab the man," said Moshe, an eyewitness.

"We didn't understand what was happening because the terrorist didn't yell anything. I called to him together with some other people, and he fled toward the synagogue. From that point I didn't see what happened," he said.

Shoshana, another eyewitness who lives nearby, recounted that "after he stabbed the man and the woman, he ran toward the synagogue and tried to get in. There were worshippers at the synagogue in the middle of the Amidah prayer. Luckily they had closed both the entrances. He couldn't get in, so he started running forward. He stabbed a woman in the hand, and I saw someone chasing him with a gun."

The woman stabbed in the hand was Ilana Abergil who was at the synagogue to help prepare the last meal of Shabbat.

"My mother was helping in the kitchen at the synagogue when she heard people yelling, 'Terrorist, terrorist!' outside," said Abergil's daughter, Nina. "She went outside without a second thought and then the terrorist pushed her, scratched her with the knife and threw her on the ground."

Nina's brother, Dudu, added that "our mother told us that the terrorist was crazed so she immediately ran outside yelling to warn everybody. As it turned out, she became a human shield. Luckily she was only lightly hurt."

At that point, the incident turned into a manhunt. An armed man fired shots in the air and later told police investigators that he saw the stabbings, but since there were many children at the nearby playground he decided to fire into the air. Security forces quickly arrived, searching for the perpetrator who was running in and out of yards and tried to break into homes in the area.

One of the neighbors said that the terrorist tried to enter one of the houses through the window, but the dog inside scared him off and he continued his flight.

"I heard several shots, I went outside and saw police officers with their guns out and the woman who was stabbed," he said. "The terrorist continued running between the houses, going from yard to yard, and went into a window waving his knife. The homeowner ran out while his dog jumped on the terrorist, who then ran for his life." Several meters down the street, the terrorist arrived at Dvir's house and knocked on the window.

In retrospect, it turned out that Dvir's house was the last stop on the stabbing spree. "My resourcefulness comes from the fact that my child was here, and I was busy protecting him," said Dvir, but her friend Dorit Avishar reported that she was "seriously traumatized."

The Shin Bet security agency interrogated the suspect, Mahmoud Faisal Basharat, a resident of a village near Jenin. While determining whether the attacker had any accomplices, the police closed off all exits from the city and searched vehicles. A police helicopter was also scrambled to search the area for accomplices.

The roadblocks were removed after an hour, when it was determined that the threat was no longer imminent.

Paramedics who treated the victims reported that they found a man and a woman in their forties. The man was barely conscious, suffering from abdominal injuries. "We administered life saving measures including medication, sedation and resuscitation, and stopped the bleeding," said one paramedic. "The woman who was with him was fully conscious, suffering from a minor injury in her arm."

Eli Nagar, the woman's brother, said "the family is really shocked. We are taking comfort in the knowledge that my brother-in-law's condition has improved from serious to moderate. Their little boy, who is only 4 years old, ran away as soon as he saw the knife. He is traumatized at home, working with a social worker. He is completely shocked by what happened to his parents. He has been saying that he keeps feeling like he is being stabbed."

Ilana Abergil was treated for a cut at the scene but was not hospitalized.

Dikla Dvir remains in the hospital for observation.

Over the weekend, two ramming attacks were thwarted in Judea and Samaria. The first occurred at around 3 p.m. on Friday at the Qalandiya checkpoint north of Jerusalem.

A 30-year-old terrorist sped around a line of cars waiting at the checkpoint and accelerated in the direction of a group of Israeli soldiers and Border Police officers manning the post. He jumped out of the vehicle, which crashed into a concrete column, and ran toward civilian security guards while yelling different things. The guards called on him to stop and fired into the air, but when he didn't heed their calls, one of the guards shot at his legs and wounded him.

The terrorist was treated at the scene.

Less than two hours later, another terrorist drove his vehicle toward soldiers and officers near the community of Ofra in the Binyamin region, but they ducked behind a concrete wall and shot the terrorist dead.

Meanwhile on Friday, two explosive devices were discovered and neutralized at the Gaza border. No organization has claimed responsibility for planting the devices.