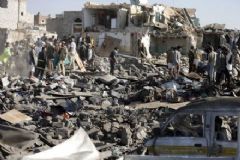 Workers search for survivors under the rubble of houses destroyed by an air strike near Sanaa airport. (Reuters)

The Human Carnage of Saudi Arabia’s War in Yemen

Five-year-old Rahma lies unconscious in the intensive care unit of the 22 May Hospital in Yemen's southern city of Aden. Her face is covered in burns; bandages swathe multiple head wounds; and her eyes are closed shut under swollen eyelids. When she regains consciousness - or if she does, as doctors could not be sure she will make it - she will discover that she'll never see her mother again.

Her mother, Naama, was among 10 members of a family, including five women and four children, who were killed in a July 9 airstrike that destroyed the Musaab bin Omar school in the village of Tahrur, north of Aden. The school had been housing families displaced by the conflict between a Saudi-led military coalition and Houthi armed groups and their allies, which took control of the capital Sanaa and large swaths of the country late last year. Ten other relatives, mostly children, were injured in the attack.

Rahma's aunt Salama, who lost three daughters in the bombardment - one of them a baby of 20 months - kept asking, "Why did they bomb us?" I had no answer for her. In the weeks I spent in Yemen, from north to south, between mid-June and mid-July, I met families every day whose relatives, often children, were killed and injured in such strikes.

The Houthis and their allies are the declared targets of the coalition's 5-month-old air campaign. In reality, however, it is civilians like little Rahma and her family who all too often pay the price of this war. Hundreds have been killed in such strikes while asleep in their homes, when going about their daily activities, or in the very places where they had sought refuge from the conflict. The United States, meanwhile, has provided the weapons that have made many of these killings possible.