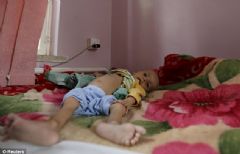 Taking its toll: Nearly 4,000 people have been killed and more than 1.2 million displaced in the conflict (Reuters)

The Human Face of Hunger: Six Million On the Brink of Starvation as War Ravages Yemen

Heartbreaking pictures reveal the true face of a civil war that has put six million people on the brink of starvation in Yemen.

Thousands have been killed in the battles between Houthi rebels and forces loyal to an exiled president Abd-Rabby Mansour Hadi, who fled the troubled country in February 2012.

But Oxfam today warned of the pressure blockades on imports are putting on the population, forcing an additional 25,000 people into hunger every day.

Half of the country's 26million population are now struggling to eat, according to Oxfam, as the war in the country rages on.

Oxfam's Yemen country director Philippe Clerc said: 'As the warring parties continue to ignore calls for a ceasefire, the average family in Yemen is left wondering when their next meal will be.'

Nearly 4,000 people have been killed and more than 1.2 million displaced in the conflict so far.

The United Nations say that four fifths of the population need help.

As well as the six million starving people, Oxfam believes 12.9million are hungry.

That number has risen by 2.3 million since March, when a Saudi-led coalition backing former President Hadi began bombarding the Houthis and imposed a blockade to cut off arms supplies. 'In a country that has historically faced food shortages, this is the highest ever recorded number of people living in hunger,' Oxfam said in a statement.

It said the blockade had exacerbated the humanitarian crisis in Yemen, which imports up to 90 percent of its food and the majority of its fuel.

He added: 'The food situation in many governorates including Aden is very critical, but we're not at the stage of famine.

'In some governorates the level of criticality is such that the next level would be famine, but we're not there and let's hope we do not get there.'

Van der Klaauw, who visited Aden at the weekend, said the United Nations hoped to scale up aid to the port city now that fighting had moved north.

Some markets in the city are still functioning, he added.

The Arab coalition announced a five-day truce from late on Sunday to allow in emergency aid, but fighting has continued in some places.

Oxfam said Saada governorate in the north was the worst affected by food shortages, with nearly four in five people going hungry and half at a critical level.

In neighbouring Hajjah governorate families uprooted by the wars are having to sell livestock at well below market value to buy food, Oxfam said.

Some displaced families in Sanaa have resorted to begging.

The World Health Organization said on Tuesday that 3,984 people had died and 19,347 had been injured between March 19 and July 19, according to data from health facilities.

It also recorded an upsurge in cases of dengue fever in Yemen, with nearly 5,700 suspected cases reported since March, around half of them in Aden.