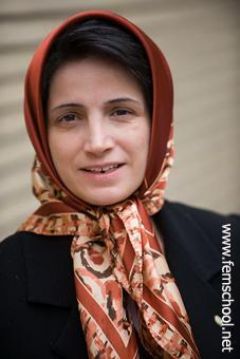 Photo Source: Frontlinedefenders.org
Nasrin Sotoudeh represented a number of political prisoners who were taken into custody during the unrest that followed the disputed Iranian presidential election in June 2009. On 4 September, she was summoned to appear in court at Evin prison and was detained on charges of "propaganda against the state" and "collusion and gathering with the aim of acting against national security".

“The Interrogator Told Me, ”We Won”t Let You Get Less Than Ten Years,”” Sotoudeh Tells The Judge

The trial court of lawyer and human rights activist, Nasrin Sotoudeh, held on Monday, December 27, 2010 on the new charge of "lack of hejab," was stopped due to Sotoudeh and her lawyer's objections to the manner in which the court was held. The judge found Nasrin Sotoudeh in contempt of the court and sentenced her to five days in prison. In an interview with the International Campaign for Human Rights in Iran, Reza Khandan, Sotoudeh's husband, said that the trial could not be held as Sotoudeh did not respond to any of the judge's questions.

"The charge for which Ms. Sotoudeh was put on trial today was "lack of hejab," but the court was held in the same branch of the Revolutionary Courts as her other charges had been reviewed. At the beginning of the session, her lawyer objected to the jurisdiction of the court, stating that her client's "lack of hejab" is not a political nor security issue to warrant the court to convene in the old branch int the Revolutionary Courts, and as the charge is a "general crime," it should also be held in the General Courts. Ms. Sotoudeh's lawyer's objection will now have to be sent to an appeals court to be reviewed for the legitimacy of the objection," he said.

Referring to the presence of a video camera inside the courtroom, Khandan told the International Campaign for Human Rights in Iran: "We couldn't figure out why they had brought a video camera. We couldn't figure out which organization and with what motives had set up [the equipment]. We don't know whether it was for IRIB [the state television] or for somewhere else."

"After Ms. Sotoudeh's lawyer raised her objection to the court's jurisdiction, Ms. Sotoudeh objected to the manner in which the court was held today, because today's court session was public, but one of Ms. Sotoudeh's colleagues, who is a prominent lawyer, too, and had attended the previous sessions as an observer, was not allowed to enter. Ms. Sotoudeh objected that when video equipment is brought into the courtroom, the court must be in a public session and anyone can attend it. Now they should allow someone who wishes to attend and is waiting outside the courtroom. In fact, other than Ms. Sotoudeh's family, her colleague was the only other person who wished to attend the trial session, but the judge did not accept this. Ms. Sotoudeh then said that if they would not allow her colleague to enter, she was not going to answer the questions until the court could resume a normal process," said Nasrin Sotoudeh's husband.

"But the Judge did not accept this and started his questioning. Ms. Sotoudeh then did not answer his questions. The Judge then sentenced her to five days in prison for contempt of court, and issue the ruling there," continued Reza Khandan.

Reza Khandan added that Nasrin Sotoudeh does not have any hope for her release due to her overall treatment in court and in prison. She is preparing herself for a long-term prison sentence. "She told the Judge today that 'my interrogators told me what my sentence is two months ago, so I am not waiting for your ruling. They told me that they wouldn't allow me to get any less than ten years in prison,'" said Khandan.

Nasrin Sotoudeh's husband told the Campaign that the incomplete trial session today lasted about an hour. "Her lawyer said that Sotoudeh had not disrupted the court, and that she had only objected to the manner in which it was being held, and the Judge could have stated whether he objection was accepted or denied. But the judge did not pay any attention to this, either, and issued a ruling for a five day prison sentence and the session ended, pending decision from the Appeals Court pertaining to the lawyer's objections," Sotoudeh's husband said.

Regarding the physical and psychological state of the lawyer who has been in solitary confinement for the past four months, her husband said: "Ms. Sotoudeh embarked on long-term hunger strikes immediately after her detention, and twice she has gone on dry hunger strike which has led to severe weight loss for her. She has gone down from 58 Kg. to 44 Kg., meaning that she lost 14 Kg. in prison. But she seemed better than the previous week during which she said she had been taken to the prison infirmary. She most definitely is not the same person who entered the prison. She is extremely thin, and to my understanding, as prison nutrition is not proper, she will not recover from this for a long time. But, thank God, her emotional state was very good."