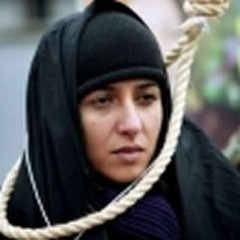 The silent screams of women and girls

"...by replacing a once progressive legal system with Sharia doctrine, the Islamic regime has systematically oppressed, marginalized and dehumanized one half of its own citizens. Under this draconian system, Iranian women have lost their inheritance rights, as well as custodial rights to their own children. They are required to secure the express approval of their husbands or male guardians to obtain passports and to travel. Under Sharia law, a woman's testimony in court is, at best, worth half the testimony of her male counterpart.

Even more astonishing, Iran's new Islamic-guided government has established a system of legalized prostitution, through the practice of "sigheh" or "temporary marriages," by which a mullah arranges a "legal union" between a man and a girl (some as young as nine years old) for a fee. The so-called marriage can last anywhere from one hour to 99 years. Under this system, men are free to enter into as many temporary marriages as they so desire, without having any legal obligation or responsibility toward the women and children that they "marry" only to use as sexual objects and slaves.

Not surprisingly, this legalized system of slavery and oppression has led to a growing sex-trafficking industry that is partially operated by government officials and mullahs themselves. The girls who are forced into this system of sexual and economic slavery are typically transported to various countries in the Persian Gulf and are sold to individuals as well as to established brothels. The budding industry of sexual trafficking of Iranian girls has led to growing concerns about the spread of AIDS/HIV and other sexually-transmitted diseases throughout the region.

TEMPORARY marriages are not the only method of institutionalized oppression of women and girls by the Islamic regime. Atefeh Rajabi was hanged in the city of Neka in the early hours of August 15, 2004. Her crime was officially declared to be "adultery," even though she had never married and was only 16 when the very judge who had condemned her to death served the added role of executioner by personally placing the noose around Atefeh's tiny neck and ordering her body to be raised. Unofficially, however, Atefeh's crime was defiance - defiance of the unnatural and unreasonable rules that were forced upon her by the Islamic government; defiance of her status as something less than human; defiance of the inequality, poverty and misogyny that have infested Iran in the past 27 years; and defiance of the binds designed to break the human spirit and destroy the essence of childhood.

To the very end, Atefeh maintained her defiance. Witnesses speak of an unusual sense of calmness in her beautiful blue eyes to the last minute. They recount the child's insolent last words, which were: "At the very least, you could have given me a glass of water. Animals are slaughtered more humanely than this."

Atefeh is not the only girl to be sentenced to death by the Islamic regime, nor the only child. Despite being a signatory to international treaties that expressly prohibit the heinous practice of child execution, Iran had the dubious honor of being the only country to execute children in 2005. In 2006, it shared this odious status with Pakistan - the only other country to have executed a child last year.

According to Amnesty International, Iran executed at least eight child offenders in 2005. It carried out its first child execution of 2006 on May 13 with the hanging of an unnamed 17-year-old boy along with an unnamed 20-year-old man. The two were hanged because they had allegedly engaged in homosexual acts.

Iran shows little sign of curbing its use of the death penalty on child offenders, just as it shows little respect for the rights of children and women as a whole. Delara Darabi, another Iranian teenage girl on death row, has spent the past two and a half years in prison for a crime she never committed. After murdering a woman related to Delara, Delara's 19-year-old boyfriend persuaded her to admit responsibility for the crime to protect him from execution. Apparently, both teenagers believed that because Delara was under the age of 18 she could not be sentenced to death. This belief proved to be devastatingly false.

With complete disregard for its obligations under the International Convention on Civil and Political Rights and the Convention on the Rights of the Child, and despite overwhelming evidence of Delara's innocence, a court in the city of Rasht found the teenager guilty of murder based on her initial claim of responsibility and sentenced her to death by hanging. The Islamic regime displayed even greater disregard for its promises to the international community, as well as to the rights of its own children, when its highest court upheld Delara's death sentence.

In prison, Delara has proven to be a remarkably poised and strong young girl with an amazing talent for painting and drawing. She has used her gift to compile a diary of her pain as a child prisoner on death row. She has produced an impressive collection of paintings that speak of the horrors of torture, of beatings, of hopelessness, loneliness, and the loss of a child's innocence. They are haunting images of injustice and brutality. They are the stories of the innocent women and children of Iran, shackled by the injustices of a brutal regime. They are a teenager's diary of crimes against humanity committed by her government."