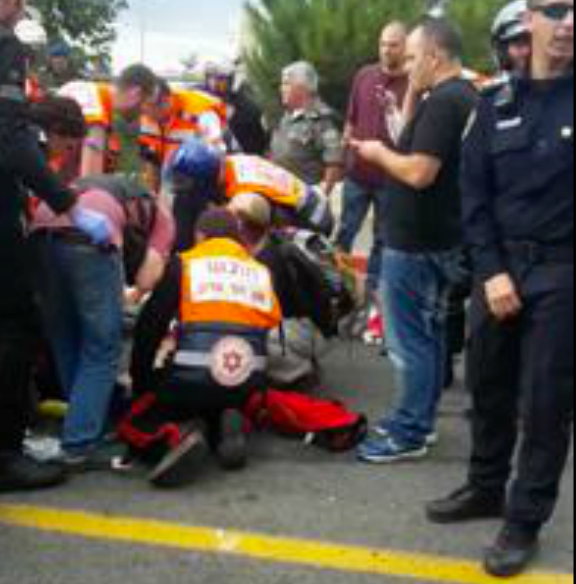 Two yeshiva students were injured in a terrorist attack near the light rail station on Jerusalem's Ammunition Hill Friday afternoon.

While one victim was stabbed in the upper chest by the terrorist, the second injury came after police attempted to stop the attacker and instead accidentally shot the second victim in the leg.

The terrorist was subdued after the incident and is in critical condition.

According to Jerusalem police, the terrorist, armed with a knife, approached the yeshiva students. He managed to stab and wound one; The other managed to escape uninjured.

At that point, security guards stationed at the nearby light rail station ran to assist the victims. In their attempt to subdue the attacker, a security guard accidentally shot the second victim in the leg.

The attack was the second within the hour.

Less than an hour earlier, two Palestinian assailants approached the West Bank Tapuah Junction roadblock on a scooter. At that point they drew their knives and attempted to stab a border guard stationed at the crossing, according to a statement released by police.

One of the attackers managed to lightly injure one of the officers on the hand before the assailants were shot and subdued by an additional Border Guard stationed at the post.

One was killed in the incident, while the other remains in critical condition.

The injured officer was treated at the scene and remains in light condition.

On Thursday, an Israeli soldier and a pregnant woman were lightly injured by Palestinians as violence continued to rage in the West Bank, primarily around the Hebron area.

Security forces killed two knife wielding Palestinians in two separate incidents that occurred within hours of each other in Hebron.

The day of violence began in the morning, at a spot in Hebron called Check- point 160 â on the road from Kiryat Arba to the Cave of the Patriarchs â where a Palestinian assailant stabbed and lightly wounded an IDF soldier in the head.

The officer quickly recovered from the attack and chased the assailant who tried to stab a border policeman at the scene.

Another Border Police officer standing nearby shot and killed the assailant, according to a police statement. The soldier was treated at the scene and transported by a Magen David Adom ambulance to the Hadassah Medical Center in Jerusalem's Ein Kerem.

A few hours later outside of Hebron, Palestinians threw stones at cars on Route 60 near by the village of Beit Einun. A pregnant woman was lightly injured in the face by glass shards from the shattered window of her vehicle.