U.N. Inaction on Uganda
All Actions of the UN Human Rights System Critical of Specific States, 2015 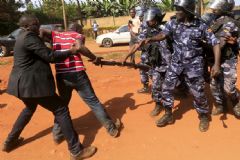 A supporter of former Uganda Prime Minister Amama Mbabazi wrestles with the gun of a policeman, as riot police disperse a gathering in Jinja town in eastern Uganda September 10, 2015.

Ugandan Police Guilty of Torture and Excessive Force Ahead of Elections

Ugandan police are engaging in arbitrary arrests and torture of opposition political activists as President Yoweri Museveni seeks to extend his 29-year rule, according to a new report by Amnesty International.

Ugandans will go to the polls in February and parliamentary campaigns are due to launch on Monday in the East African country, recently visited by Pope Francis on his African tour. Museveni seized power in 1986 and amended the country's constitution in 2006 to allow him to seek additional terms in office. He consequently won a fourth term in 2011, beating main rival Kizza Besigye with 68 percent of the vote.

The Amnesty report, based on 88 interviews, claims that the police were guilty of using excessive force to disrupt and disperse gatherings of opposition activists. This includes arresting two leading opposition presidential candidates: Besigye, who represents the main opposition party Forum for Democratic Change (FDC), and former Prime Minister Amama Mbabazi, an ex-member of Museveni's National Resistance Movement (NRM), who is now running as an independent candidate.

The report also claims that two individuals with connections to Mbabazi's campaign, Vincent Kaggwa and Christopher Aine, were arrested separately and tortured by Ugandan police. Kaggwa was reportedly sprayed with high-pressure cold water, while Aine claimed to have been beaten with iron bars and cans.

Muthoni Wanyeki, Amnesty's regional director for East Africa, the Horn and the Great Lakes, called on the Ugandan authorities to "put an immediate end to the harassment and torture" of political opponents and activists. "All Ugandans must be free to attend political rallies and engage with candidates, regardless of their political affiliations," said Wanyeki.

The Ugandan Police Force (UPF) did not respond immediately to a request for comment on the allegations.

Museveni, who has generally been regarded favorably by the West, faced criticism in 2014 for approving a law that carries life sentences for "aggravated homosexuality." The U.S. withdrew aid and imposed visa restrictions on Uganda as a result, despite the Kampala government claiming the law had been misinterpreted. The law was struck down by Uganda's constitutional court in August due to irregularities in the process of its enactment.