U.N. Inaction on Ethiopia
All Actions of the UN Human Rights System Critical of Specific States, 2006 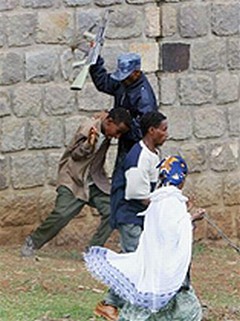 "A senior Ethiopian judge appointed by his government to investigate election-related unrest says security forces shot, beat and strangled to death 193 unarmed protesters last year. Wolde-Michael Meshesha, a vice chairman of the 10-member inquiry, accused the government Wednesday of trying to suppress the results of the probe amid sharp questions about Ethiopian Prime Minister Meles Zenawi's commitment to democratic reform... "This was a massacre," Wolde-Michael said in a telephone interview with The Associated Press. "These demonstrators were unarmed yet the majority died from shots to the head."... Wolde-Michael said police records he saw showed 20,000 people were rounded up during the anti-government protests. Of them more than 100 opposition leaders, journalists and aid workers are on trial for treason and attempted genocide."