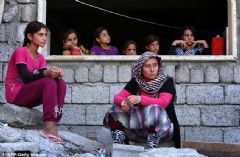 Iraqi Yazidi women who fled ISIS take refuge in the Kurdish city of Dohuk. Around 40,000 other Yazidis have been forced to the top of a mountain by the militants

Up to 40,000 Iraqis forced to choose between dying of thirst… or slaughter by extremists

Some 40,000 Iraqi refugees face starvation after being forced into hiding on a barren mountain top by a circling band of bloodthirsty jihadists.

They must now decide whether to descend and risk being slaughtered or hope their attackers are defeated before they die of thirst or hunger, officials said.

They were driven from the town of Sinjar by ISIS over the weekend and have already been forced to bury at least 20 children who succumbed to the harsh conditions on Mount Sinjar. Marzio Babille, the Iraq representative for the United Nations Children's Fund (UNICEF) said: 'There are children dying on the mountain, on the roads.

'There is no water, there is no vegetation, they are completely cut off and surrounded by the Islamic State. It's a disaster, a total disaster.'

One of those trapped, 23-year-old Shihab Balki, texted Loveday Morris from The Washington Post to say he had witnessed several deaths over the last few days.

'I saw their bodies with my own eyes,' he wrote.

Their plight came as the UN Security Council warned that ISIS may be held accountable for crimes against humanity for its systematic persecution of minorities in Iraq.

The council singled out the group's attacks on the strategic city of Tal Afar near the Syrian border, which it seized in June, and neighboring Sinjar, which it captured on Saturday, for condemnation.

ISIS issued an ultimatum to tens of thousands of people from the Yazidi community on Saturday to convert to Islam, pay a religious fine, flee their homes or face death.

One picture showed several men lying face down in a field with a gun pointed at their heads, with the caption: 'Kill them wherever you find them.'

Yazidis follow an ancient religion with links to Zoroastrianism.

At least 40 children from those displaced from Sinjar were killed in the violence in the area, UNICEF said yesterday.

Kurdish fighters from Iraq, Syria and Turkey were co-ordinating operations in northern Iraq to reclaim areas lost to the jihadists and rescue thousands of civilians stranded in the nearby mountains, it was reported by AFP.

Iraqi helicopters have dropped some supplies, but officials warned the process of providing safe passage would take days.