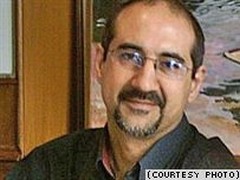 WASHINGTON (Reuters) - The United States called on Iran on Monday to release U.S. citizen Kian Tajbakhsh and said it was "deeply concerned" about the scholar, who was detained in Tehran last week and has previously been accused of spying. Tajbakhsh, an Iranian American who holds a doctorate in urban planning from Columbia University, was arrested by Iranian authorities in May 2007, charged with spying and then released after more than four months in Tehran's Evin prison.

It was not clear why Tajbakhsh was detained last week.

Iranian authorities have accused foreigners of fomenting the demonstrations.

In 2007, Tajbakhsh was one of several Iranian Americans who were jailed by Iran and became pawns in the strained relations between Tehran and Washington. Iran does not recognize dual nationality.

The United States, which cut diplomatic ties with Iran after the 1979 Islamic Revolution, accuses Iran of seeking to develop nuclear weapons. Iran says its nuclear program is to generate electricity so it can export more oil and gas.

"We have urged the Iranian authorities to immediately release Kian Tajbakhsh, as well as return the passports of all Americans being kept in Iran on groundless charges, he added, citing Iranian American graduate student Esha Momeni.

Momeni visited Tehran to research a master's thesis on the women's rights movement in Iran and was arrested on October 15 on a traffic violation. According to Kelly, she has been barred from leaving the country since her release from prison in November.