U.N. Inaction on Uzbekistan
All Actions of the UN Human Rights System Critical of Specific States, 2007 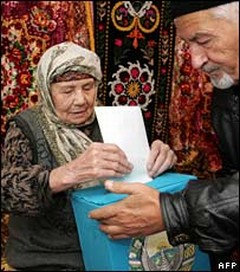 "Human rights organisations say the vote is neither free nor fair."
Source: AP

"Foreign monitors have accused Uzbekistan of holding a presidential election where voters were given no genuine choice of candidate.

The Organisation for Security and Cooperation in Europe said Sunday's vote had "generally failed to meet many OSCE commitments for democratic" polls.

Islam Karimov, in power since Soviet times, is almost sure to be re-elected when results are announced later.

He has faced Western criticism over his human rights record.

There has been no explanation why he was allowed to run again for office after serving a constitutional limit of two presidential terms.

Many organisations, including the BBC, were refused permission to enter the country to cover the election.

The OSCE sent a 21-strong team to observe the poll but said earlier that comprehensive monitoring was pointless due to "the apparent limited nature of the competition".

Mr Karimov faced three virtually unknown candidates who all praised his running of the economy and did not explicitly ask Uzbeks to vote for them.

'No choice'
"The hardly visible election campaign was characterised by the absence of any real competition of ideas and political views," the OSCE said in a statement on Monday.

"Since all candidates... publicly endorsed the incumbent, the electorate was deprived of a genuine choice."

The OSCE, regarded as a key electoral watchdog in Europe, also questioned the official turnout figure of 90.6%. "The unusually high turnout... in particular in light of the small number of voters observed by the [OSCE] mission, raises further concerns regarding the accuracy of the reporting of results," it said.

Monitors from Russia, an Uzbek ally, and other CIS states said the poll had been conducted peacefully and they had seen no evidence of vote-rigging.

Vladimir Churov, secretary of the Russian Central Elections Commission, praised the ballot and attributed the reported high turnout to Uzbeks' "care for the development and prosperity of their country".

'Afraid to speak' -- The BBC's Natalia Antelava, reporting from nearby Krygyzstan, said some Uzbeks had told her they were voting for opposition candidates to make a point.

Others she spoke to said they were too busy trying to survive to vote, or that there was no point as they knew the outcome already.

One woman who spoke to the AFP news agency said people were unhappy with the political system but "if you say one wrong thing you can find yourself unemployed or, worse, in prison".

Mr Karimov's rule has been marred by the crackdown on opposition in the city of Andijan in 2005.

Eyewitnesses said hundreds of civilians died at a peaceful protest but Mr Karimov insisted the security forces had killed only 189 Islamist militants.

The government has since been accused of many cases of torture.

The country is rich in energy and resources but its economy is in dire shape, our correspondent says.

Analysts say that the black market is the only functioning economy and that the country depends heavily on the income from an estimated 1.5 million illegal migrants working in Russia and neighbouring Kazakhstan."