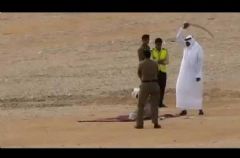 With Executions on the Rise, Saudi Arabia is Now Hiring Even More Executioners

Saudi Arabia, a member of the UN's Human Rights Council and a close US ally, is hiring more executioners, according to its Ministry of Civil Service website.

With 85 people already executed this year alone, Saudi Arabia is recruiting eight more executioners to fulfill positions that require carrying out beheadings, as well as performing amputations on those who committed smaller offenses, according to a report from Reuters.

The job, classified as "religious functionaries," was posted on the Ministry of Civil Service website on Monday and does not require any special qualifications since it falls within the lower tier of the country's civil service pay scale, according to the application form.

Executions have been on the rise since last August, with the call for additional executioners coming a day after a man became the 85th person to be executed in Saudi Arabia this year. The man was beheaded on Sunday for a drug-related offense. While the punishment falls under the country's strict Sharia-based legal system, Saudi Arabia has received immense criticism for the practice from human rights groups, especially in cases concerning criminal offenses such as sorcery or drug smuggling. Murder and drug-related crimes account for a majority of the country's executions.

Adam Coogle, a Middle East researcher for the Human Rights Watch (HRW), told VICE News that while Saudi officials associate the executions with Islamic law, Coogle emphasized that "nothing in Islamic law mandates that you execute drug offenders. The Saudis don't have to execute people for drug crimes."

Behind China and Iran, Saudi Arabia is one of the top five countries in the world for sentencing people to death, according to an Amnesty International report released in March. In January, gruesome footage surfaced on social media showing Saudi authorities publicly beheading a woman in the holy city of Mecca. At the time, her execution was the tenth to be carried out in country.

The current number of executions carried out this year is quickly approaching the 88 people that were sentenced to death in the whole of 2014, based on figures from HRW. Amnesty International, however, reported that at least 90 executions were performed in Saudi Arabia in 2014.

Among those executed, about half were Saudi, while the rest hailed from Pakistan, Yemen, Syria, Jordan, India, Indonesia, Burma, Chad, Eritrea, the Philippines and Sudan, according to the BBC.

Saudi Arabia has also come under fire for handing out harsh sentences beyond executions, like in the case of political activists, who can receive 10 to 15 year prison sentences for crimes like inciting public opinion and undermining the regime. A recent case that received critical attention and sparked public outcry, involved 31-year-old Saudi blogger, Raif Badawi, who was sentenced to 10 years in prison and a total of 1,000 lashes for insulting religious clerics.

Although executions have surged in Saudi Arabia, Saudi officials have not offered an explanation for the rise. Some diplomats have suggested that the soar in executions is linked to the fact that additional judges have been appointed, meaning the system can handle more cases, Reuters reported. The recruitment of executioners comes four months after King Salman of Saudi Arabia ascended to the throne and sought to reorganize the government, following the death of his half brother King Abdullah. While the King has endorsed a younger generation of officials, he has yet to alter the judicial sector, where conservative officials still hold power.

Saudi Arabia is also leading airstrikes in Yemen, the Arab world's poorest nation. Since March, Riyadh has led a bombing campaign in Yemen that has killed hundreds of civilians. According to Coogle, the turbulence in the region can be linked to the high rates of executions.

"The insecurity in the region is influencing authorities to try to toughen up on crime to look like the system can deliver justice," Coogle said.