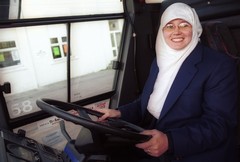 "Police in Taif caught a woman violating the law by being behind the steering wheel of a moving car, the Al-Jazirah newspaper reported yesterday. The woman, an Arab foreigner married to a Saudi man, was immediately arrested. The husband was called to the police station to pick up his spouse. The cops instructed the husband to make sure his wife does not repeat such a terrible crime as driving a car, which, according to the defenders of the law can lead to immoral behavior."