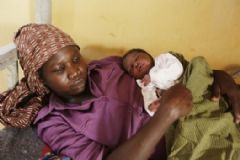 Lami Musa, 27-year-old who says her husband was killed before she was abducted by Islamist extremists, cradles her 5-day-old baby girl at a refugee camp clinic after she and others were rescued by Nigerian soldiers from Sambisa Forest, Yola, Nigeria Monday, May 4, 2015. (Sunday Alamba, Associated Press)

Hundreds of women and girls who were kidnapped by Boko Haram were raped, some repeatedly, in what officials have described as a deliberate strategy by the Islamist group to breed a new generation of fighters in Nigeria.

In interviews with the New York Times published on Monday, the women said they were locked in houses by the dozen and forced to engage in sexual relations with the militants.

"They chose the ones they wanted to marry," said a 25-year-old woman named Hamsatu, adding that she was four months pregnant with one of the Islamist's babies. "If anybody shouts, they said they would shoot them."

According to the report, dozens of newly freed women and girls, many of whom are pregnant, have been showing up at a refugee camp near Maiduguri, as Nigerian soldiers continue to repel Boko Haram forces from the region.

Most of the 15,000 people who are at the camp are women, relief officials told the Times. Over 200 of these women are pregnant, but many more may be carrying the unwanted children of militants.

"The sect leaders make a very conscious effort to impregnate the women," Borno governor Kashim Shettima was quoted by the Times as saying. "Some of them, I was told, even pray before mating, offering supplications for God to make the products of what they are doing become children that will inherit their ideology."

Some of the girls subjected to sexual violence were as young as 11. Many contracted HIV. Boko Haram fighters also killed older boys and men in front of their families before taking women and children into the forest where many died of hunger and disease, freed captives said.

Several weeks ago, the Nigerian army rescued hundreds of women and children from the Islamist fighters in northern Nigeria's Sambisa Forest in a major operation that has turned international attention to the plight of hostages.

After days on the road in pickup trucks, hundreds were released into the care of authorities at a refugee camp in the eastern town of Yola to be fed and treated for injuries.

"They didn't allow us to move an inch," said one of the freed women, Asabe Umaru, describing her captivity in the forest. "If you needed the toilet, they followed you. We were kept in one place. We were under bondage.

"We thank God to be alive today. We thank the Nigerian army for saving our lives," she added.