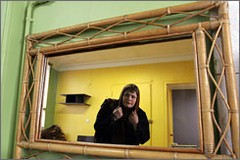 Mahboubeh Abbasgholizadeh was arrested for demonstrating against discrimination against women in Iran.
Source: USA Today

"Iranian police shoved and kicked them, loaded them into a curtained minibus and drove them away. Hours later, at the gates of Evin prison, they were blindfolded and forced to wear all-enveloping chadors, and then were interrogated through the night.

All 31 were women - activists accused of receiving foreign funds to stir up dissent in Iran. But their real crime, says Mahboubeh Abbasgholizadeh, was gathering peacefully outside Tehran's Revolutionary Court in support of five fellow activists on trial for demanding changes in laws that discriminate against women...

Over the past 10 months, security forces have "become more and more aggressive even as women's actions have become more peaceful and tame," said Jila Baniyaghoub, an activist who has also spent time in jail.

"By tightening the noose on us, they are trying to warn us that they will not tolerate even the mildest criticism," she said...

Abbasgholizadeh is a 48-year-old mother of two daughters, a matronly divorcee with a fringe of chestnut hair peeking from under her shawl, and her story highlights her change of fortune since the days when Khatami was president and reformists were gaining influence in Iran.

Then she had Khatami's ear through the Center for Women's Participation, a government office set up to promote women's rights, and wrote a report for the president on the state of women in Iran.

One of Ahmadinejad's first actions was to replace the office with one called "the Center for Women and Family Affairs" - a renaming that seems to reflect his conviction that a woman's place is primarily in the home.

Under Ahmadinejad, Web access has been curbed, almost all liberal newspapers have been shut, and activists say they are under closer surveillance and often summoned for questioning. The women say they have borne the brunt of the onslaught.

Abbasgholizadeh and other reformists have waged a lengthy battle against laws that permit death by stoning for women accused of adultery, the practice of polygamy, employment laws that favor men, and family laws that deny divorcees full custody of their children and entitle them to only half the inheritance a man can receive.

But far from backing down, Ahmadinejad's government has now turned its crackdown to colleges.

It is drafting a law to limit women students to half the places in college, instead of the 65% they now occupy. It is also restricting women's entry to medical schools, arguing that they put a strain on limited - and sexually segregated - dormitory and transportation facilities.

Women working for the government must leave work by 6 p.m. to get home and tend to their families.

And once again, with the arrival of summer, authorities are cracking down on women for not covering up enough. Police say more than 200 women have been arrested this year and released only after promising to dress more conservatively.

On April 2, five activists were arrested in a Tehran park for collecting signatures calling for changes to laws that discriminate against women. Two of them, Fariba Davoudi Mohajer and Sussan Tahmasebi, are under sentences of six months and a year respectively, and are free pending court appeals.

On June 12 last year, police broke up a gathering of more than 5,000 women demanding reforms in a Tehran square. Seventy people were arrested and five organizers were charged.

She said discrimination extended even into her prison cell in Section 209 of Evin prison: Male prisoners got to smoke and drink tea as much as they liked, while women were limited to two cigarettes and two cups of tea a day. Men could exercise in sunshine; women got their 15 minutes outdoors at sunset.

She was never physically abused, she said, but had to endure what she called "white tortures" - no bed or mattress in her 6-foot-by-9-foot cell, just blankets; a fluorescent light that was never turned off; a tiny barred window near the ceiling that admitted a thin ray of light. And always, a deathly silence.

She had to visit the bathroom blindfolded. Denied TV or radio, she was given only a Quran to read, and she couldn't call home until a day or two before her release on March 19.

Still, she said it was better than the previous time she was in Evin, for about a month in 2005 for attending a foreign-organized conference. Then her cell was too small to stand up in, she recalled..."