U.N. Inaction on Iran
All Actions of the UN Human Rights System Critical of Specific States, 2006 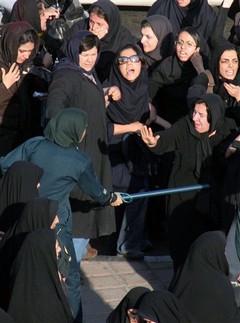 "In May, a group of 54 Baha'i youths who were tutoring underprivileged youths in Shiraz were arrested. None was officially charged with a crime, but a number of them were released only after their families paid high amounts of bail. The UN Special Rapporteur on the Freedom of Religion or Belief announced in March that she had received a copy of a confidential memo stating that Iran's Supreme Leader, Ayatollah Khomeini, had instructed the Command Headquarters of the Armed Forces to identify members of the Baha'i community and monitor their activities. The Baha'i community has a long history of official religious persecution in Iran.