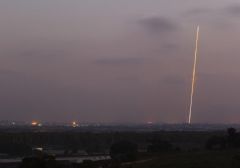 Site of the stabbings

A Palestinian terrorist wounded an IDF soldier and a civilian Wednesday in a stabbing attack near Beit Hadassah, a building that houses Jewish families in the West Bank city of Hebron.

One of the victims was moderately wounded and the other was suffering from light injuries.

One of the youths injured in the attack is the son of former Bayit Yehudi MK Orit Struck. He was injured while tackling the terrorist and attempting to rescue the soldier.

The incident occurred during a security check at the entrance to Beit Hadassah.

A civilian security coordinator who was on the scene fired on and killed the terrorist.

MDA paramedic Zaki Yahav described the scene of the attack. "When we arrived on the scene, we saw near Beit Hadassah two approximately 20-year-old youths laying down, fully conscious and suffering from stab wounds."

Yahav said that "one of the youths was suffering from a number of stab wounds to his upper body and the second was stabbed in the leg." Paramedics transported the victims to Shaare Zedek Medical Center in Jerusalem.

The Hebron area has been a hotbed of terrorist attacks against Israeli civilians and security forces during the terror wave that has plagued Israel over the past two-and-a-half months.

On Monday, a Palestinian knife-wielding terrorist stabbed and critically injured an Israeli civilian near Hebron's Cave of the Patriarchs, before being shot dead in the act by Border Police officers on the scene.