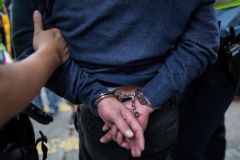 State television said the elite Revolutionary Guards had arrested "several members of an infiltration network linked to hostile Western governments who were working in the country's media and social networks."

It did not give details, but said they would be published later.

The ILNA news agency, which is close to Iran's reformists, had earlier reported the arrest of journalists Issa Saharkhiz and Ehsan Mazandarani, but did not say when they were detained or on what charges.

Saharkhiz was released in 2013 after serving three years in prison for insulting Khamenei and publishing anti-regime propaganda.

He was head of media at the culture ministry under reformist president Mohammad Khatami, who was in office from 1997 to 2005.

In recent months, he had criticised Khamenei and other senior figures in interviews with foreign media.

Mazandarani runs the reformist daily Farhikhtegan. He was previously arrested in 2009 for acting against national security and contact with foreigners, at a time of protests against the re-election of hardline president Mahmoud Ahmadinejad.

Earlier Tuesday, state television reported the arrest of a Lebanese-American, Nezar Zaka, on suspicion of having links to the US intelligence community.

There are also four Iranian-Americans being held in Iran, including Washington Post correspondent Jason Rezaian, who has been detained since July last year on spy charges.