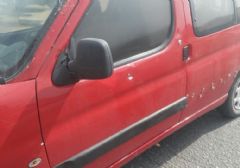 Scene of stabbing attack in Jerusalem

A Palestinian man stabbed a 47-year-old police officer during a security check at the back entrance to the Kiryat Arba settlement on Friday, a day after a 31-year-old Israeli sustained serious stab wounds in an attack in the same location.

Magen David Adom (MDA) paramedics arrived at Kiryat Arba security gate, by the road that leads to Hebron and evacuated the officer to the Sha'arei Tzedek Medical Center with light wounds, MDA said.

On Thursday, MDA paramedics found a seriously injured man suffering from stab wounds to his chest, stomach, and back.

The hospital listed him as being in serious condition.

Moti Onger, a senior MDA paramedics who reached the scene on Thursday, said he found a fully conscious man with stab wounds, and began providing him with life-saving medical treatment on the spot, which included bandaging the wounds, providing liquids, and blood infusions.

"We evacuated him in serious condition" to hospital, Onger said.

IDF units launched a sweep the area searching for the attacker.

A 16-year-old was also lightly injured in a stabbing attack in Jerusalem Friday afternoon.

"The young boy did not recall being stabbed by his assailant," said an MDA responder who arrived at the scene. "He said he was attacked with punches by his assailant, who fled shortly thereafter."

Emergency forces arrived at the scene in response to an emergency hotline call.

Rescue forces found the boy was wounded very lightly, with a minor stabbing wound to his upper body.

A suspect was tracked down based on a description provided by the victim. Investigations are ongoing.