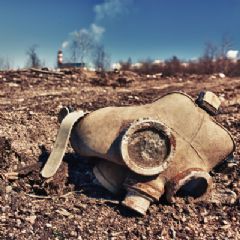 Islamic State (IS) militants may have used chemical weapons in an attack on a town in northern Syria on Friday.

Medecins Sans Frontieres (MSF) said on Tuesday it had treated four members of a family who suffered from breathing difficulties and developed blisters after a mortar hit their home in Marea.

Local rebels say the shells were fired from an IS-held village to the east.

A spokesman for one group, the Shami Front, told the New York Times that half of the 50 mortars and artillery rounds which hit Marea contained sulphur mustard.

The powerful irritant and blistering agent - which is commonly known as "mustard gas" but is liquid at ambient temperature - causes severe damage to the skin, eyes and respiratory system and internal organs.

Staff treated their symptoms and gave them oxygen before transferring them to another facility for specialised treatment.

"MSF has no laboratory evidence to confirm the cause of these symptoms," said Pablo Marco, MSF's programme manager in Syria. "However, the patients' clinical symptoms, the way these symptoms changed over time, and the patients' testimony about the circumstances of the poisoning all point to exposure to a chemical agent."

On Monday, the Syrian American Medical Society said its field hospital in Marea had received more than 50 civilians who exhibited similar symptoms. Some 30 civilians developed skin blisters, with doctors identifying the agent to be sulphur mustard.

The medical organisation said samples had been taken from patient blood, clothing, and hair as well from the shelling site, to be assessed.

Earlier this month, the US military said IS was suspected of having used chemical agents in an attack on Kurdish forces in northern Syria. Reports of a sulphur mustard attack on Iraqi Kurdish Peshmerga fighters in Iraq are also being investigated.

US officials recently suggested IS might have obtained the sulphur mustard in Syria, despite the government declaring that all of its stockpiles had been destroyed under a disarmament deal agreed following a deadly sarin nerve agent attack in the suburbs of Damascus on 21 August 2013.